Changing of the Guard for 2016: New AO SM Chapter President

2016 brings a passing of the torch for AO SM presidency. Michael, who helped create this chapter and first introduced its core members to The American Outlaws, has stepped down as President and in his place I will be taking the reigns.

You all have probably seen, or heard, me at match viewings leading chants and I’ve been involved with AO SM since the beginning. I have been and a passionate supporter and player of the game for almost 22 years now, starting around 5 years old, and I mean it when I tell everyone soccer is my religion which probably explains why I’m up at 5:45am every Saturday and Sunday to catch EPL and Bundesliga and coordinate my work schedule around all USA matches. 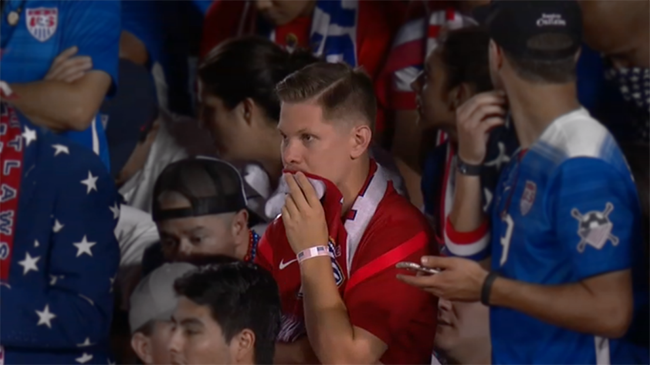 Borderline tears on national TV during the Concacaf Cup. Thanks Fox Sports!

I’m excited to have the opportunity to help grow this chapter and make our viewing parties bigger, louder and better than ever! Along with rebuilding I want to bring this chapter together for things like fundraisers to help local youth soccer, BBQ’s to bring the group closer outside of games, and most importantly create consistency for match viewings. Having locked in a perfect new home bar and building on an existing relationship with their management and the company, I can see an awesome future for AO SM in 2016 and beyond. Mix in Copa America and the Olympics and it’s the perfect recipe for US Soccer fans here in Santa Maria. I look forward to singing with you all at match viewings and welcoming many new members!