To support the United States National Soccer Teams through a unified and dedicated group of supporters. Creating a community locally and nationally to Unite & Strengthen U.S. Soccer fans from all parts of this country.

“The story of The American Outlaws starts in Lincoln, Nebraska. Three huge (we mean HUGE) United States soccer fans Korey Donahoo, Justin Brunken, and Ben Cohoon began by throwing viewing parties at a local bar (Captain Jack’s… pilgrimage to it someday!) and traveling to as many games possible.

It sparked excitement among them who felt like they could do more.

Early on what they noticed was a lack of consistency from game to game with regards to the level of supporter organization and communication, particularly with events surrounding the game for fellow fans to meet up (i.e. tailgates, parties, etc.).

It was then decided to make AO a nationwide, non-profit supporter group.” 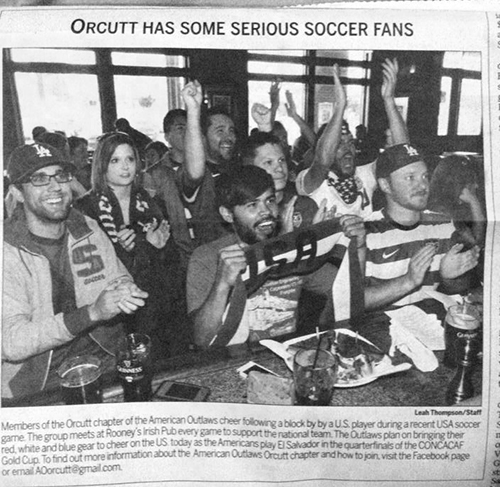 The presence of the American Outlaws in Santa Maria starts around 2010 when a group of it’s core members started to gather to watch USA compete in the World Cup in South Africa. The group was a mix of those who have played soccer all their lives, life long fans and those new to the beautiful game.

As the World Cup passed and other US Soccer matches came along the group continued to meet up at various bars and houses to support the US. When our paths crossed with a childhood friend who made the group aware of the American Outlaws it was a no brainer that we had to start our own chapter here in Santa Maria.

Originally labeled as Orcutt we officially were recognized as the 70th chapter of the American Outlaws. We quickly started recruiting and spreading our love for the game however we had our share of growing pains. Maintaining membership due to the majority of our members coming from the local Air Force Base was the first roadblock. Then factor in our ongoing search to find a viewing bar that supported us and soccer in general. We had an uphill battle but we stayed dedicated and here we are today proudly sporting the Santa Maria name and we are continuing to spread our love for the game to grow AO SM everyday!